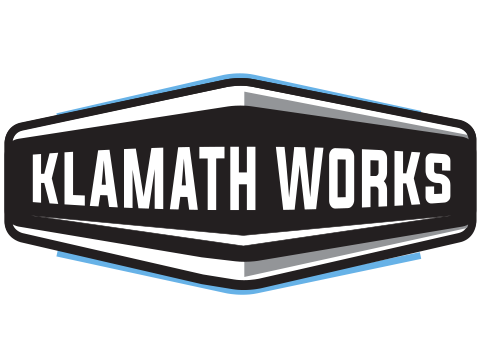 Klamath Works: a Philosophy and a Physical Campus

The Klamath Basin is home to timber, ranch and agriculture communities hit hard by changing economic and social patterns. Since the recent recession our rural region struggled to hold on to living-wage jobs, contributing to problems with crime, drug abuse and homelessness.

In 2014, the founders of Klamath Works set out to make a change. They learned that the typical way of helping needy individuals is through welfare programs. And the typical way of providing services to needy clients has been to send them to many different locations many miles apart – with the risk of losing them at any step along the way. 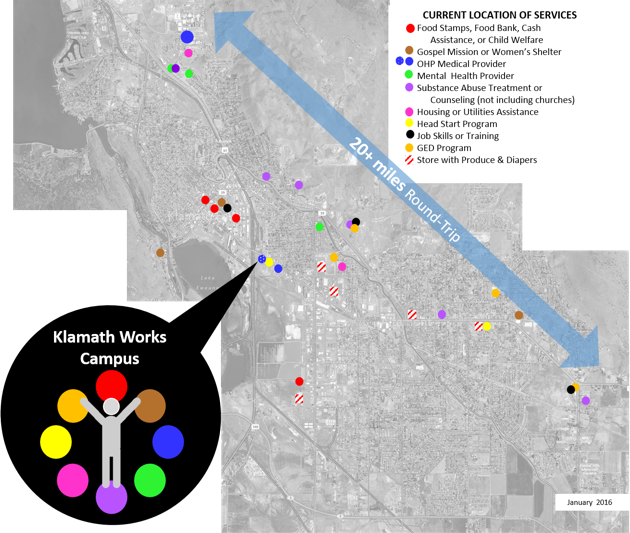 If we cared only about material poverty, government welfare programs might suffice. But the worse form of poverty is of the mind and the spirit. Indeed, research verifies the emotional toll that joblessness imposes on individuals. Unemployment raises the risk of alcohol or drug abuse, divorce or even suicide.

The founders of Klamath Works met with dozens of government agencies, charities and religious ministries. They heard a consistent message: the best welfare program for Klamath County would be more jobs. Because a job is the best weapon in combating poverty – not merely poverty of income but of health, of pride, and of spirit.

So our team came up with a bold and radical solution: the Klamath Works Campus where a unique consortium of non-profits and social services will collaboratively serve clients with the common goal of returning the needy to self-sufficiency by preparing them for work. Work has meaning beyond a paycheck and the necessities it buys. A job re-engages individuals with their neighbors and communities. A job provides choices and the hope for a better future. Individuals with jobs don’t merely have fuller bank accounts. They have fuller lives.

Construction on the Klamath Works Campus has already begun, through generous support of the Sky Lakes Medical Center, whose leadership understands the crucial interactions between work and health. Government social services are considering locating to the campus, where they can better serve their clients by being near other providers. And nonprofit and faith-based groups will also station at the campus.

The Klamath Works Campus is a new comprehensive, integrated social service model that will not only help those in need support themselves financially, but to fully realize their human potential.


The initial partners in this first phase of the campus are: